My first excursion outside Addis Ababa proper was a modest but memorable one.

With the Embassy closed for the New Year holiday, some of our military personnel took the opportunity to organize a walk/run from the Embassy to the September 11 Memorial in the Entoto Mountains.

The turnout was good with many American and Ethiopian employees participating.  There were also other “friends of the Embassy” in attendance.  For example, I walked half the route with the man whose company provides the Embassy with rental cars.

Most of the people participating, myself included, intended to walk the route, but I guess about a quarter of the crowd was there to run.  In hopes of getting everyone to the finish line at about the same time, the walkers were given a 15-minute head-start over the runners.

I set out with the walkers, and ended up passing the time with a few Ethiopian guys.  From the Embassy, we passed through a market area which was mostly closed due to the holiday.  There were still plenty of people milling around, however, and they were quite curious as our group snaked by.

Sheep are a popular source of meat in Ethiopia, and this seemed especially true on New Year’s Day.  Not only were there several men selling sheep in the marketplace, but we also passed several mounds of sheep parts that were left over after slaughtering.  These mounds of sheep parts included the skins, heads, and other random bones, horns, and organs.  As I would learn from one of my Ethiopian companions, these gory piles of parts were not rubbish.  On the contrary, they were raw materials that would be sold to rendering plants and turned into leather, fertilizer, and other products.  This would explain why each pile of sheep parts had an attendant.  I imagine that they were protecting their sheep parts not just from other people, but also from the street dogs that you find all over Addis Ababa.

Besides the sheep sellers, there were also people selling produce, clothes, and miscellaneous household items.  We passed people going to church, men working on cars, and children playing.  It was a fine glimpse of daily life.  One thing I found interesting was the little kids who seemed to be trading colored pages from coloring books.  I was curious if they were trading them as “artworks” or if something else was going on.

Before long, we passed through the market and village and emerged into the countryside.  As we climbed into the Entoto Mountains, we passed many people coming down the mountain road.  Judging by their clothing, many of these people must have been headed to church or other holiday celebrations.  There were a lot of smiles and hellos as well.  As I greeted the people, I got the full spectrum of responses, from the standard “hello” and “hey” all the way down to “wazzup?” and the even more concise and cool, “‘sup?” – accompanied with a head nod, of course.  There were many “happy new year” greetings too.  Even an old woman who was doubled over carrying a massive bundle of sticks stopped to say hi.

By the time we reached the countryside, the group of walkers had stretched out, and the two Ethiopians and I were at the front of the pack.  Then the runners started to reach us.  When the first runner passed us, he heckled us to join him.  I wasn’t motivated, but my two companions took the bait and gave chase.  They didn’t last long, however, and a hundred meters up the road, they reverted back to walking.  Actually, many of the runners ended up walking at least part of the way.  Due to the altitude and the grueling gradient of the route, only the heartiest runners could hold pace for the entire distance.

I never caught up to the two Ethiopian guys, and I didn’t drop back to join the others, so I walked the rest of the way by myself.  As I was walking along, a young lady tapped my arm.

“Where are you going?” she sheepishly asked me.

“To the top,” I told her, as I gestured up the road with my hand.

"For training?” she aked.

Then we exchanged new year greetings, and I continued up the hill.

Toward the top, we reached another village and thicker crowds of people.  I was still walking by myself, but by now runners were passing me more frequently.  Seeing this, two boys from the village concluded that I was not a walker, but a weak runner.

Jogging on either side of me, they shouted out encouragement: “Come on!  Run faster!!  Don’t let everyone beat you!”

Although they had my best interests in mind, I didn’t comply with their commands.

“Look,” I said as I pointed to my jeans, “I don’t have good running clothes.”

I don’t think they were convinced, so they prodded me on a bit longer and then gave up.

Once we reached the upper village, the worst was behind us; it was all downhill to the September 11 Memorial.

The last stretch of the hike meandered through a forest of skinny trees, which someone later told me were invasive eucalyptus, and then the path opened into a verdant field.  About halfway down the field on the left side sat the memorial.

I’m not sure how long the hike was (I heard people saying both five and six kilometers), but it took me 65 minutes from start to finish to climb the mountain.  And my reward?  Well, besides the satisfaction of completing the course, an ice cold beer was waiting for me.  Not a thing wrong with that!

Eventually all the participants and the support vehicles reached the memorial, and we assembled for a brief ceremony. 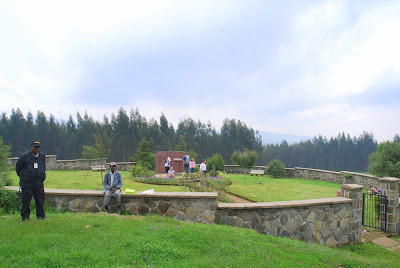 The memorial itself was a big circular stone wall.  There was a gate at the point where the circle faced the field, and from the gate a sidewalk extended to the center of the circle.  In the center, there was a circular concrete base with a brick wall along its back curve, and centered on the base was a brick pedestal with a plaque.  Around the sidewalk and the circular base, flowers and shrubs had been planted.  Furthermore, in the forest behind the stone ring, 3,000 seedlings had been planted as part of the memorial.  While the plaque didn’t say this specifically, I think the 3,000 seedlings were meant to represent the 2,977 victims of the attacks, which included three Ethiopians.  Dedicated in 2004, I’m told that the September 11 Memorial on Entoto was the first memorial in the world to honor the victims of 9/11.

For the ceremony, everyone congregated inside the stone wall, and the U.S. Ambassador to the African Union stood on the concrete platform in the center and presented a thoughtful prayer for those lost on 9/11, with praise also for the unity that resulted from the tragedy.  As a former Army chaplain, he was well within his element.  Then one of my colleagues sang a moving rendition of the Star Spangled Banner, and the ceremony concluded.

Some of the hardcore people in the group opted to run back down the mountain, but for the rest of us, there were buses at the ready.  It didn’t take us long to reach the Embassy again, but the whole trip down, the air reeked of fried brakes.

To cap off the day, the Marines hosted a barbeque.

Once everyone had their fill of burgers, beers, and dogs, the rains returned.  Rainy season isn’t so bad when the rain cooperates!
Posted by Chris at 7:50 PM

Another great read from your travels!!

What a great post - I had no idea that Ethiopia was the first country outside the U.S. to erect a 9-11 memorial.
It's always wonderful to hear about your adventures!

I was told it was the first 9/11 memorial in the world, including in the U.S.