A few hours before the festivities were to commence, Addis Ababa was humming with activity.  The roads were choked with traffic (more so than usual), and there were many pedestrians.  The Ambassador had granted the Embassy staff early dismissal so that we could get home before the streets became completely unmanageable, so by 2 PM, I was homeward bound.

Meskel is an Amharic word that means cross, and Meskel holiday commemorates the finding of the True Cross (the cross on which Jesus was crucified) by Saint Helena in the 4th century.  Then-Empress Helena, mother of Emperor Constantine the Great, went on a journey to the Holy Land to recover holy relics, and finding the Cross was one of her main objectives.  Following a vision that she had in a dream, Helena had a huge bonfire built in Jerusalem.  She added frankincense, and the fragrant smoke drifted on the air but did not dissipate.  Then the smoke settled on the ground at the exact spot where the Cross was buried.

Helena found three crosses at the place indicated by the smoke, and she was able to determine which cross was the True Cross by a miraculous healing.  A woman on her deathbed was allowed to touch wood from all three crosses.  The first two crosses, presumably of the criminals crucified alongside Jesus, had no effect.  When she touched the wood of the third cross, which turned out to be the real deal, the ill woman immediately recovered.

As much of the Cross as possible was excavated from the site, and most of the wood was stored in Helena's private chapel, which later became the Basilica of the Holy Cross in Jerusalem.  Some portions of the Cross did find other homes, however, and after a journey through Egypt, one piece came to reside in Ethiopia, at Amba Geshen.

In addition to the True Cross, Saint Helena is credited with finding the nails of the crucifixion, Jesus's tunic, and a piece of rope that was used to help secure Jesus to the cross.  Not a bad day's work for a woman in her late 70's.

On my ride home through the city, we passed several choir groups on their way to Meskel Square, the site of the main celebration.  These young men and women were dressed in white embroidered robes with colorful sashes.  We also passed several small neighborhood celebrations in the final stages of preparation.  At these smaller ceremonies, people had hung streamers across the road and built small bonfires which would be lit at sundown.

It was nearly 3:00 by the time I got home, so I didn't have much time to waste.  I changed clothes and started walking toward Meskel Square.  It's about half an hour from my house.

Along the way, I stopped for a shoe-cleaning.

I was wearing canvas shoes, and they were completely saturated by the time the shoe-shine boy was finished.  At least they did look cleaner than they had before, and the service only set me back 15 birr (83 cents).  As has happened before, though, some of my Ethiopian friends would later tell me that I had totally overpaid.

At Meskel Square, an endless stream of people was flowing into the amphitheater.  I joined the heaving masses and realizing that I wasn't going to find anything better, I wedged myself into the first opening I could find.  The place was so packed, there wasn't even room to sit.  So like everyone else, I squatted down on my precious patch of real estate.  If you are not accustomed to squatting for long periods of time (which I am not), it can get real old, real fast.  I knew right away that I was in for a long night.

Each row of squatters was flanked by a small aisle in front and one in back which allowed for people to continue passing by.  As time wore on, however, even the aisles filled up.  This meant that late-comers had to carefully worm through the solid block of people, and many were not successful.  It's a pretty universal reaction to get angry if someone kicks you, elbows you, steps on your hand, or pushes you, and I saw a lot of heated exchanges in my area.

In addition to the spectators weaving through the crowd, there were two other groups of people in the mix: the vendors and the beggars.  Of the first group, there were men selling religious articles and books, and also some selling food and drink.  The beggars on the other hand were predominantly people with medical issues, but there were also several mothers with babies seeking alms.  There were people with missing limbs; people with rashes, sores, and open wounds; blind people; people with growths and other deformities; and people with a range of mental illnesses.  The donations from the people in the crowd were flowing relatively freely because we were at a religious ceremony and charitable giving was the pious thing to do.  More important, however, were the close quarters we were sharing.  When confronted with an up-close-and-personal view of an oozing skin ulcer, most people will pay a few birr to make it go away.

Yes, there was plenty of drama all around me, but the main event, of course, was unfolding in front.  With the roads blocked for the evening, the 15 lanes of traffic that pass by Meskel Square made an ideal stage.  In the center of the stage, political and religious leaders were gathered.  The church choirs were gathering in front of them.  Off to the right was the bonfire.  A tall cone-shaped structure covered with pine branches, it looked very much like a giant Christmas tree.  There was even a star on top, in the form of a bouquet of meskel flowers (a type of yellow daisy).  A ring of soldiers stood guard around the base of the bonfire, and various holy men and women were milling around.

Against this backdrop, a few floats were tooling around with priests and deacons riding on top in their finery.  There were men walking around with religious paintings and banners.  There was even a Saint Helena (something akin to Miss Meskel) on one of the floats - or so I was told; I couldn't see her from where I was squatting.

Then the formal program started.

The mayor kicked off things by welcoming everyone.  Then he addressed the diplomatic corps directly, requesting support from the diplomats present for Ethiopia's bid to get "World Heritage" status for the Meskel celebration.  I guess that means Ethiopia wants to have Meskel inscribed on UNESCO's List of the Intangible Cultural Heritage of Humanity.

Then the mayor continued into a full-blown speech.

He was followed by a few more speakers, whom I could not understand since they were speaking Amharic.  We, the people, had devoted a fair bit of time listening to these speeches, so when the last one concluded, I think we all breathed a collective sigh of relief.  Then the emcee delivered a crushing blow.  "Now we will offer an English translation," he announced.

I realize that this was for my benefit, but my haunches were already killing me.  Rehashing the speeches in English was only prolonging the pain.

After what seemed like half an hour more, the translations were finished.  I had survived!

I wasn't out of the woods yet, though.  The next part of the program was the liturgical music showcase.  One by one, the church choirs took center stage and danced, chanted, and sang.  Each group got 5 or 10 minutes to perform in the center, and there seemed to be an endless number of choirs waiting in the wings.  The people around me were digging this.  Everyone was singing and clapping along.

When a choir would finish in the center, it would move to the periphery and continue singing and dancing, and before long, the square was filled with choirs.  Interspersed among them were a bunch of camera-toting "VIPs" who had been sitting in the box seats up front.  This whole set-up reminded me of Papua New Guinea where at cultural festivals a handful of VIP foreigners would be prancing around with the dancers and all the local people would be relegated to the cheap seats behind the fence.  This never did seem right to me.

Anyhow, once all the choirs had their moment in the spotlight, we moved to my favorite part of the celebration: the part where we got to stand up!

While the choirs continued singing, the entire crowd rose in unison to cheer them on.  And after an hour and a half of squatting, I was ready to cheer too.  The joy of stretching my legs was reason enough. 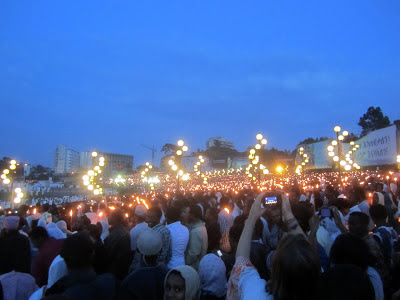 By now it had gotten dark, and things turned kinda magical.  Everyone (except for me apparently) had brought a candle along, and now was the time to use it.  Passing the flame from person to person, soon the entire amphitheater was filled with thousands of flickering candles.  People were singing and chatting and laughing.  Some people launched fireworks.

Meanwhile, following a few prayers and ceremonial flourishes, the bonfire was lit.

So there we were...  the bonfire was roaring; the candles were twinkling; fireworks were popping; and ladies were ululating.  It was pretty cool.

Although I never did get the full story, I was told that there is significance in both the direction the smoke travels from the bonfire and in how the logs eventually collapse.  For example, maybe it is fortuitous if the fire collapses to the west, and ominous if it falls east.  I never did get the exact explanation, though.

One other tradition worth noting is that after the fire completely dies down, the faithful draw a cross on their foreheads using the ashes (similar to the Ash Wednesday tradition in the Catholic Church).


I didn't stick around to watch the fire collapse, however, nor did most other people.

As we all slowly moved toward the exits, packed in like sardines, I felt a little hand in my pocket.  Yes, it was a boy who looked to be about 6 or 7 years old searching for treasure.  Unfortunately for him, though, I was not carrying anything worth stealing except for my camera, which was in my hand.

Once I extricated myself from the square, the crowds thinned out and I walked on home.  All along the way, the celebrations continued.  The pubs were full, and firecrackers were flying across the road.  Some of the fun was a bit ill-conceived, however.  Caught up in the moment, young men had lit several fires right on the sidewalk.  Unfortunately, most of these fires were within a meter of either storefronts or parked cars, and I had a feeling that a Meskel beat-down was imminent.  As entertaining as that sounded, though, I decided not to stick around.
Posted by Chris at 11:08 AM

Nice story Chris! I enjoyed the pic and video embedded in the narrative.