I had been to Santorini's twice before, but never for a meal. Those first two times, I had only a drink and an appetizer. In this case, the third time was the charm.

I arrived around 6:30 PM, at which time there were only two other diners: a couple of young ladies. I sat at the opposite end of the dining room, but I was facing them, so it was almost like we were sitting together.

To start things off, the waiter brought out some ouzo served in a hand-painted miniature bottle, a basket of bread, and a dish of what looked like hummus. And this was all complimentary. At Santorini's they make great bread. In the basket, there was a plain roll, a breadstick with red pepper inside, and my favorite, the onion breadstick.

For my starter, I ordered fried eggplant, and for my main I tried to order stuffed cabbage. It was sold out, however, so I opted for the biftekia. I wasn't familiar with this dish, but it was described on the menu as two large meatballs served with potatoes and tzadziki.

Once I placed my order, I ate my bread and hummus and enjoyed my ouzo.

As I was sitting there, I noticed the owner's son heading out the gate with his scooter. I'd guess this kid was about 6 or 7 years old, and he had the curliest hair ever.

As he headed out on the street, I thought to myself, "Helluva place to ride a scooter!"

The road was an uneven, cracked mess of rocks, mud, and potholes, and in the short time before the kid passed from my view, he had to dismount and walk around several obstacles. He needed a four-wheel-drive scooter, but alas, he only had the standard two-wheeled model!

It was just getting dark as the kid rode off, and I wondered if that was the best idea. But if he and his parents were comfortable with the notion, I decided it was no concern of mine.

Soon enough, my fried eggplant arrived. Thin-sliced, crispy, and with a squeeze of lime juice, these were done to perfection. Unfortunately, however, my main course followed my appetizer after an interval of only 30 seconds, so I had everything at once. 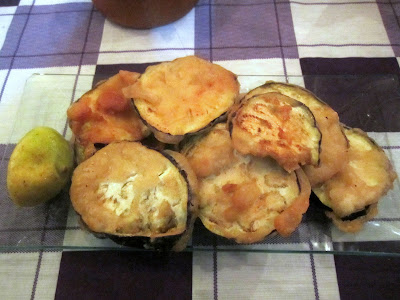 After I polished off the eggplant, I turned to the biftekia. It was just as advertised in the menu, only better. The meatballs were indeed large, and they were flattened into patties. Each one was topped with a slice of tomato. The combination of spices and bread crumbs inside the meatballs reminded me very much of American meatloaf, and I had a real hankering to douse them in ketchup. But I resisted the temptation. I doubt ketchup was even available. 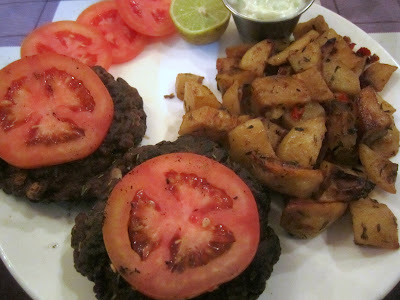 The potatoes too were more than just potatoes. They were kicked up a notch with sun-dried tomatoes and herbs.

And the cool and creamy tzadziki balanced out the salt of the meat and potatoes very nicely.

When I was nearly finished with my meal, I noticed a few of the restaurant staff talking to the owner, and shortly thereafter she walked down to the gate. A few minutes later, two guards with reflective orange vests appeared. One was holding the little, curly-headed boy by the hand, and the other was carrying his scooter. The boy looked pissed off, and when he saw his mother he started arguing. Then he stormed off into the area of the compound where his family lived, and his mother came back to the restaurant. I'm not sure what had transpired, but it seemed like little man was in hot water.

I was too stuffed for dessert, but after dinner and a show, I left satisfied.