When I entered the China Great Wall Restaurant, I was struck by two things: The place was packed, and I was literally the only customer who wasn't Chinese.

"This bodes well," I thought.

I was dining alone, so the hostess seated me at a table for two and removed one of the place settings.

I ordered stir-fried chicken with chilies.

"Better to take this one," he continued, "same but without bones."

His recommendation was the Gongbao chicken, and I took his advice.

He thought for a second before answering. "Only a little bit," he told me.

The Gongbao chicken and steamed rice arrived in 15 or 20 minutes, and I dug in. The portion was large, and the taste was great. It was also a bit firey. 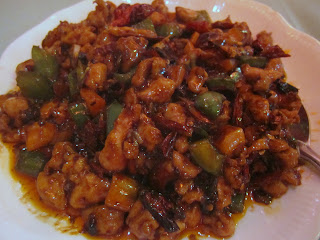 As I started sweating from the chilies, I recalled the waiter's assessment of the heat.

Ethiopian food can be very spicy, so my Ethiopian waiter was clearly using a weighted scale to assess the heat.

I finished off my beer and ordered a second. This provided some relief against the chilies.

Before long, I had cleaned my plate, and I was feeling pretty full.

Then out came my pork dumplings. 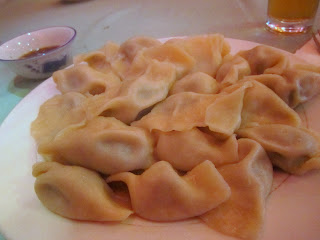 I had anticipated 4 or 5 dumplings, but instead I received a whole plate full. There were at least 20 pieces.

The dumplings came with a sauce which seemed to be soy sauce mixed with crushed garlic. A little bit of that went a long way.

As I started eating my second course, a cat came sauntering into the dining room. It stopped at a table near mine and started whining to the diners there for some food. They shooed it away, and it moved to my table.

The cat weaved around the legs of my table and then sat near my chair and meowed... and meowed and meowed. I tried to shoo it away, but I wasn't entirely successful. Instead of leaving me alone, the cat jumped up in the empty chair across from me and stared at me like we were on a date. At this point, the cat was within easy range of my dumplings, so I started waving my hand to keep him from getting too close.

As I was defending my dumplings, the Chinese chef suddenly burst out of the kitchen.

I wasn't sure what was happening, but it was soon apparent that he was on cat patrol.

He grabbed the cat from my table and apologized. Then he started walking away with the cat still in a death grip.

Just near the back door, he threw the cat to the ground and with a swift kick, he sent it flying outside. I felt a bit sorry for the little guy.

In the end, the plate of dumplings was too much for me to handle, and I requested a take-away box, which cost 8 birr.

One day later, the dumplings tasted just as good.