Pakistan: Down in the Salt Mines

It was a fine December weekend when I took a day trip to the Khewra Salt Mines with my good friends Kaki and Nenita. The Khewra Salt Mines are located about 2 hours from Islamabad, about midway between Islamabad and Lahore. We took Goldie, the little Honda Civic that could. The drive was scenic, and the weather was perfect.

When we arrived, we parked and went to buy tickets. I was relieved to see that they were indeed running tours on a Saturday since it said in my guidebook that they only gave tours on weekdays. I didn’t tell Kaki and Nenita about this potential snag until after it was revealed not to be an issue.

At the ticket desk, there was a crowd of people. We were the only foreigners, and the ticket sellers requested for us to wait inside a building behind the ticket booth.

We dutifully went to the V.I.P. waiting room which had a few couches and 2 bathrooms.

After about five minutes, we grew tired of sitting around. We left and waited outside like everyone else.

The Khewra Salt Mines are part of Pakistan’s Salt Range, the largest salt deposit in the world. It is the second largest salt mining operation in the world, bested only by Poland. The Pakistani salt deposit was supposedly discovered when Alexander the Great’s horse began licking the exposed rock salt, as Alexander was passing through the region on his drive to conquer the world. The mines have been producing every since.

The mines in their current state were engineered by the British during their occupation of Pakistan. At Khewra, there are some 18 levels of tunnels dug into the mountains of salt, and tourists are permitted on levels 7 and 8, if I recall correctly. There is a small train that tourists can ride into the mine. It is the original British train from 1918.

Kaki, Nenita, and I wanted to ride the train, so we waited half an hour for the next trip. It cost about 50 cents to ride, and most of the Pakistanis chose to walk the few kilometers into the shaft rather than pay.

As we waited, a man gave us some background information on the mines. I wasn’t paying attention, so I don’t really know what he was telling us. We also went to the gift shop where there were rock-salt sculptures, rock-salt lamps, and table salt for sale. The salt and salt crafts were dirt cheap, which I guess isn’t so surprising.

When it was finally time for our train ride, our guide led us down to the mine entrance to wait.

The salt mines are a big draw for school groups, and on this day, the place was crawling with middle- and high-school-aged children.

As had been the case in my previous travels in Pakistan, I was the big draw, particularly to the young men. Kaki and Nenita may as well have been invisible.

Some of the kids approached me to practice a bit of English. They were all brimming with curiosity.

Soon enough the train chugged out of the tunnel and dropped off a load of school kids who had actually paid the extra money to ride. Then Kaki, Nenita, and I boarded, and we had the whole train to ourselves.

The train utilized pretty basic technology. It appeared that an electrical cable ran along the roof of the shaft. The engine had a boom that made contact with the cable, and a rope was tied to the boom. To control the speed of the train, the conductor would just pull the rope to make it so the boom either was or wasn’t touching the electrical cable. It got the job done, and we were dropped off on the tourist level in a few minutes.

Our tour started at the salt mosque – a small but attractive structure complete with minarets. The salt at Khewra comes in 3 basic colors – regular white, red (due to iron), and pink (due to manganese). The mosque was constructed of salt bricks of the 3 different colors, and each brick was illuminated by embedded lighting. It looked pretty sweet. 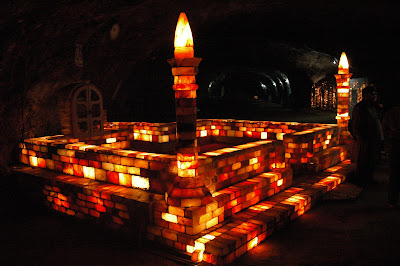 Near the mosque, there was a salt-brick working post office. I asked our guide who used the post office, thinking it might be the miners. I guessed wrong; only tourists used it.

Over the course of the next hour, we viewed salt ponds, salt-brick tunnels, salt-crystal tunnels that sparkled like jewels, smooth marble-like salt passages, and numerous formations created by dripping salt water similar to the features found in a limestone cave, for example. 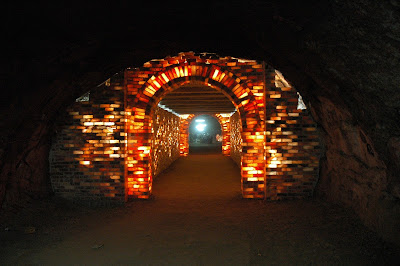 There was salt everywhere. Even the air was salty.

Toward the end of the tour, there was a large open room with a snack bar on one side and a cool multi-colored salt-brick elevated floor on the other side. That salt floor would have been a great spot for dancing if the mine ever wanted to get into the party business.

Leading off from the salt floor, there were a few passages. We went down the first one, and our guide showed us an ancient log that was protruding from the salt. That piece of wood was carbon-dated to be 6 billion years old.  Just near the piece of wood, there was a sign written in Urdu. I asked our guide what it said, and he told us that it was instructing people not to burn the log. After that, we took a closer look, and sure enough, the edges of the log were charred, and there were used matches scattered around it. We all got a good laugh over that one.

Down the other passageway, there was a chamber with some ponds, and salt carvings of Jinnah, Pakistan’s founding father, and the Lahore tower. Maybe it was the poor lighting, but neither looked like very good depictions to me.

Back in the passage leading out of the chamber, we passed the spot where the school kids all lick the salt wall. Licking the wall is supposed to ensure that they will pass their exams, so they all gladly partake.


Our guide pointed out the licking area to us as a point of interest, but he didn't expect us to actually lick. Being shameless tourists, however, we had other ideas. I licked first. Tasty! Kaki and Nenita were a little more hesitant.

I explained that bacteria couldn’t live on a pure salt medium, so unless they licked something that wasn’t dry salt – fresh kid drool or a dried loogie, for example – then there was nothing to worry about. (For my fellow egg heads out there, I am aware of the halophilic bacteria that thrive in salt rich environments, but, as far as I am aware, these don’t do bad things to humans.) Don’t correct me if I’m wrong.

Whether or not they were influenced by my argument, both Kaki and Nenita sidled up like Alexander’s horse and had a good lick. A few months later, we all passed our exams and went off to university.

That marked the end of the tour, so we went back to the large chamber with the snack bar to wait for the train. The area was packed with school kids, and several of the young men came to talk to me. Some wanted to have a photo with me. Kaki and Nenita were still invisible.

Soon the kids hiked out of the shaft, and we cruised by them in style on the train. Once we got off the train, I tried to tip our guide on behalf of the group. He told us that he wasn’t allowed to take any money, so we didn’t press the issue.

As we walked back to the ticketing area, we passed some old guys selling big chunks of salt – in a variety of sizes, shapes, colors, and textures. We each bought a piece or two.

Then we piled into Goldie for the 2 hours back to Islamabad. Along the way, I took the opportunity to stop and pose with several unusual road signs. And why not? It’s not every day you come across an actual hedgehog crossing. 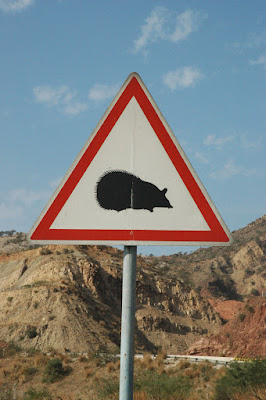 Thankyou for sharing something good about my country :)