The last weekend of November, I made a daytrip to Nathiagali with my good friends Nenita, Tangela, and Raja.

We took Goldie, the little Honda Civic that could, and I drove. Goldie has no heat (or A/C for that matter), so in the winter, no matter how cold it is or how hard it is raining, I keep the window rolled down. Otherwise the windshield gets totally fogged up.

On this particular day, which was a bit chilly, there was some minor whining about the window, although everyone was aware of the window situation well before we set out.

Nathiagali is a scenic spot in the mountains, a bit further than Murree, that the British established as a hill station back when they occupied India and Pakistan. The road is a narrow, steep affair, with curves to spare. It reminded of the mountain roads in the rural U.S., except for the ridiculous level of traffic. On the road to Nathiagali, there were plenty of pleasure drivers mixed in with the tons of buses, mini-buses, trucks, taxis, and tankers. There were also the odd horse cart and donkey cart. In general, the bigger the vehicle, the slower it moved, so the buses and trucks would often wind up with several cars and mini-buses stacked up behind them. No one would wait for long, though, and as soon as the smallest opportunity would present itself, the first car or two would go for the classic blind kamikaze pass. 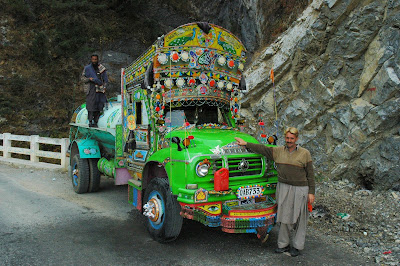 Like everyone else, we found ourselves in the kamikaze passing cycle, where we would get stuck behind a truck and zoom around it on a blind corner only to find ourselves behind another slow truck.

It was a blast, and Goldie was doing swell.

Only once on the ride up did we have a really close call. At that time, we passed a truck so closely that when we pulled back in front of it, we were close enough to swap some paint with both the truck and the on-coming car. Almost. It was tight. Nenita and Tangie sucked in their breath, and Raja was clinging pretty tightly to the handle over his window. Everyone instantly recovered once we were safely through, though.

As we drove, we had the Pakistani tunes cranked, and Raja was able to tell us what the songs were about.

It was an awesome drive to Nathiagali, and we got there in record time. Raja was impressed at Goldie’s performance on the steep roads. Evidently he had some doubts when we started.

Anyway, the hill stations were developed so that the British could escape the heat of the lowland cities during the summers. Today, they still function mainly as summer destinations, so Nathiagali was pretty well shut down when we got there. We couldn’t even find a place serving lunch.

We ended up driving around and admiring the scenery. We decided to check out the Governor’s House, but it wasn’t really open for tourism. We turned around when we came to the armed guards and the locked gate.

On the way back from the Governor’s House, we drove past St. Mathew’s Catholic Church, and decided to stop for photos.

While we were photographing the church, some guys with horses came up. Their shtick was to lead tourists around on horseback for a fee. 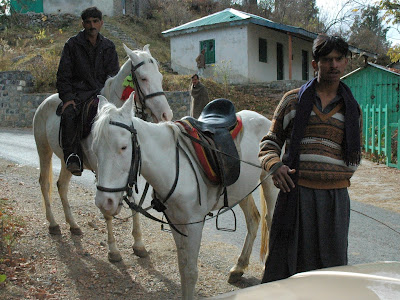 Nenita wanted her picture on the horse, so she saddled up. Then Tangela saddled up. Then I, with my mild fear of horses, was peer-pressured into saddling up. Raja mounted his horse, and we were all set.

The horse guys led us over to the scenic overlook, and we posed for photos on the horses. The overlook was something else. You could see all the way to the snow-capped mountains of Indian Kashmir. 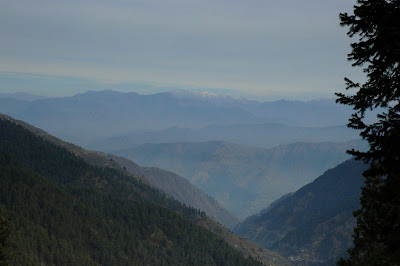 After the photos, they led us the short distance back to the car which was parked at the church. Once we got off, we each paid 50 rupees (80 cents) for the use of the horses. The horse guys started caterwauling, asking for 100 rupees at least. We wouldn’t hear of it, and since we had a Pakistani with us, we felt a little more legitimate. He felt that 50 rupees was too generous as it was.

We drove away and any hard feelings instantly melted away, I’m sure.

On the drive back to Murree, the traffic was insane, which was no surprise. We saw a few crashes, and several near misses. In one instance, a huge bus was flying down the hill towards us, and when it hit a turn, its front wheels turned and its rear wheels slid the other direction. The driver corrected before he totally spun out, which would have been bad news for us (not to mention for the bus which was bursting at the seams with passengers).

We all thought it was great. Perhaps the fumes were getting to us by this point.

Outside of Murree, we stopped at a roadside roasted corn vendor for a quick snack. In the woods around the corn stand, there were wild monkeys hanging around patiently waiting for some corn of their own. 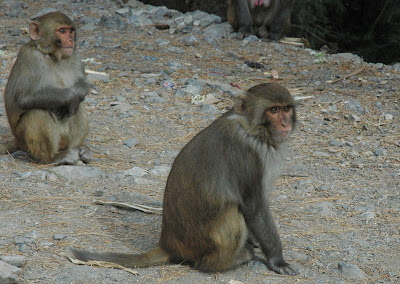 Tangie and Nenita didn’t want to go around the monkeys, so Raja and I went to buy the corn. The monkeys came close, but they didn’t seem to be so bold as to attack people. Besides, my rabies vaccinations are up-to-date. I got some awesome shots of the monkeys, and they did not bother us. I think they were purposely trying to look cute so that we would feed them, but we didn’t. The corn guy gave them some scraps, though.

We ate our corn in the car and drove on down to Murree.

Murree, while also a hill station, is bigger and more accessible than Nathiagali. As such, it has more to offer year round. We stopped for lunch.

The restaurant that Raja recommended was the same one that another Pakistani had recommended to me on a trip to Murree I had taken several months ago.

We had a good spread for lunch, and only a few things looked suspect. We ate the suspect things as well, though.

After lunch, the check came. Nenita wanted to treat. Raja tried to trump Nenita and said he would treat since we were guests in his country. As there were already two people fighting over the bill, Tangie and I didn’t even offer. That would only have complicated things further, as you could imagine.

As we were walking from our table to the counter where we were to pay, Nenita and Raja continued to fight over the bill.

I walked outside to wait.

As I was waiting in front of the restaurant, three Pakistani guys about my age came to talk to me. We did all the usual greetings, and then they asked me where I was from.

I told them that I was from America, which they all thought was good and well. Unfortunately, they had no clue what this meant.

“So you are from London?” the first guy queried.

The second young man chimed in: “So you have a Chinese passport?”

“No, I have an American passport.”

“Are you South African?” they asked.

"No," I tried again, "I am from America, and I have an American passport. I am not Chinese or British or South African.”

As my dad would say, I was dealing with some real mental midgets.

This discussion was going nowhere fast, and we went through the whole geography run-around several more times before Nenita, Tangie, and Raja came out of the restaurant. I don’t know who ended up paying for lunch.

The whole discussion with the three Pakistanis was amazing to me because in my travels this was my first encounter with people who didn’t know what it meant to be an American. Maybe other people I had met had thought that the U.S. was part of China or the U.K., but they never vocalized it to me.

Having just finished a huge lunch, we bought a few bags of roasted peanuts from a street vendor outside the restaurant and set off for a bit of shopping. We started by hitting a handicraft store. After a bit of browsing I bought a mug. Nenita was still looking, so I went outside to wait. Tangie came soon after.

There was a table of merchandise outside, and a Pakistani woman came by to look. She mistook me for a store employee and started asking me in Urdu something about a sweater. We all got a good laugh over that one. I was dressed in local garb, though, so the woman might have been confused by that.

After the handicraft store, we went to another store, and Tangie bought a blanket to use in the car for the ride home. Once we hit a few more shops, it was getting late, so we decided to head back to Islamabad. Tangie was right: It was getting cold. 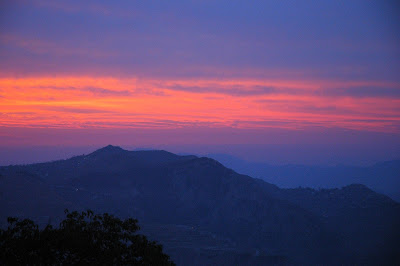 As the sun set on the mountains, so spectacular was the sunset that the clouds seemed to be on fire. We stopped for a few more photos, and before long, the sun was totally gone. This meant that I had to drive down the mountains in the dark. The drive was just as crazy as it had been on the way up, and, of course, the darkness only increased the hairiness of it all.

We were swerving, ducking, and dodging, and the tunes were blasting once more.

Everyone was totally laid back. Whenever there was a close call, we would all laugh and make jokes. Thankfully no one in the car was prone to anxiety or the ride home would have been a nerve-wracking mess for us all.

Cold hands and red noses aside, we got back to Islamabad with no problems, and in plenty of time for the Saturday night parties.
Posted by Chris at 9:18 PM