I had made plans to visit Saidpur village with my good friends Kaki, Tangie, and Mollie, but on the day we were to go, it was raining buckets.  I called around to see if anyone was still interested, and to my surprise, everyone was still game.  I drove around in Goldie, the Little Honda Civic that Could, and assembled my posse. As you may recall, I keep the window down in Goldie at all times, so it made for a cold, wet ride for the driver’s side passenger.

Saidpur is a small village that butts up against the Margalla Hills on the edge of Islamabad, although the two are nothing alike. It took us about 5 minutes to get there.

We drove past the Saidpur goat market and parked in the parking lot of a small deserted-looking hospital on the edge of the village. The rain had let up, and we got out and walked around.

Lonely Planet has a blip on Saidpur that mentions it is famous for its pottery. We stopped in a few shops and weren’t impressed. We made a few sympathy purchases and moved on. One thing I did like was a large model train (several feet long and at least a foot tall) that a potter had constructed out of clay. It cost several hundred dollars, which wasn’t unreasonable, but I just don’t think it will ever sell because it would probably break pretty readily if it were moved. It probably weighed a ton also. 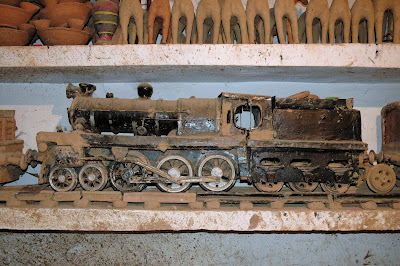 After the pottery shops, we walked through the town to the hills on its perimeter. The ditches were flowing with sewage, and there was garbage everywhere. The rain had turned most of the paths to mud. We were having a good time, though. 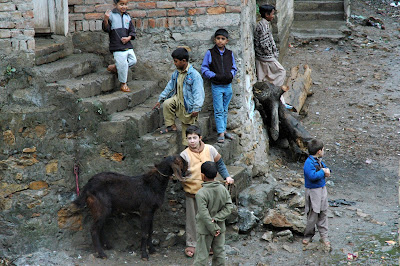 There were no other visitors around, and around every corner we would find something interesting – children getting water at a pump, old men chatting at a store front, boys playing cricket. For a while, we were like the Pied Piper with a train of young children following us around. There were goats and chickens throughout the village, and monkeys on the fringes near the hills. 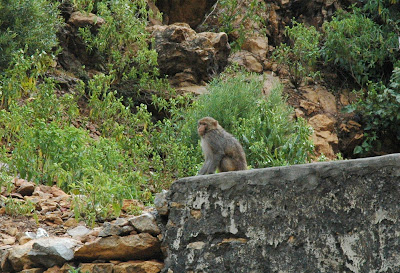 As we were wandering, we saw a sign for the SMS Guard Training School. SMS is the company the Embassy has contracted with to provide guard services for the Embassy itself as well as the staff residences in town. SMS guards are easily identifiable because they wear blue uniforms with orange or red baseball hats.

We thought it would be cool to check out the guard school, so we followed the signs through the winding streets. We never did find it, but in our search, we did pick up a young Pakistani lad who spoke good English. He thought we were silly, but he led us around and pointed things out to us like mosques and some ruins. We thought the ruins were Hindu when we had first passed them, and our young guide confirmed this. At one point, we ended up on a path on the same level as the rooftops of some homes. On one rooftop, a woman and her daughters approached us. Mollie was trained in Urdu, so she spoke to the woman. The woman wanted to know if we were lost, but Mollie explained that, no, we were just tourists. 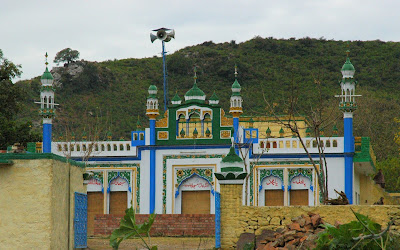 Saidpur is not a big place, so we left after an hour or so in search of lunch. We stopped by Kaki’s house, and from there we decided to go to a new Chinese restaurant that another friend had recommended. Kaki rode with her husband Mel, and Mollie, Tangie, and I rode in Goldie. It was pouring again.

We found the restaurant, which also happened to be a beauty parlor, and there was one other group of diners off in a private room.

The hostess seated us and gave us menus. Then the comedy commenced. She couldn’t speak English, and we couldn’t speak Chinese. That alone should not have been a huge problem since the menu was in English and Chinese and we could have just pointed to what we wanted to order. That didn’t work. When we would point at one dish, she’d point at another. We were unclear if what we were trying to order wasn’t available or if she was just recommending other things to us. When the food did arrive, we devoured it. Unfortunately, we had no idea exactly what we were eating since the hostess seemed to have decided for us what we were going to eat. We were cracking up the whole time.

Our friend who had recommended the place didn’t mention the language barrier. Perhaps, it didn’t strike her as pertinent since she speaks fluent Chinese. As I would later learn, however, she was aware of the problem, but she didn’t want to scare people off from the restaurant.  So she never mentioned it.

Once we finished eating and were paying, a Pakistani guy came out and asked us in English how we had enjoyed our meal. Another Pakistani had also appeared and was stationed at the exit. Where were these guys when we could have used them?

The rain was coming down by the bucketful again, so we dashed out to our cars. It was a cold, wet ride home for Mollie and Tangie, but totally worth it, I’m sure.
Posted by Chris at 10:35 AM