Always keen for a brewery tour, I contacted Murree Brewery to see if one might be possible. After a few weeks, I received a reply to my letter:  The brewery manager was happy to oblige.

With the brewery onboard, the next hurdle was getting clearance from the Embassy.

Murree Brewery is located in Rawalpindi, the sister city to Islamabad, and since any travel outside Islamabad city limits required approval from the security office, I contacted the guys with my proposal.  Luckily, security agents enjoy brewery tours as much, if not more, than your average Joe, and permission was granted without much hassle.  The security office capped the trip at eight participants, due to the capacity of the armored cars we would be taking and because it is obviously easier to safeguard a small group than it is a big one.

With the ground rules set, I put out the word that there were five seats available for the tour.  I had taken a seat for myself off the top, of course, and two went to security guys.  Well, within two minutes, the tour was full, and there was a lengthy waiting list.  As I mentioned earlier, employees had to request permission to leave city limits for any reason, and these requests were often denied due to security concerns.  Many people just gave up trying after a few such rejections, so when someone presented a pre-approved trip as I had done, people were chomping at the bit to join.  Unfortunately, there just wasn't room to accommodate everyone.

When the big day finally arrived, we met up at the Embassy for a 9 AM departure.  We all felt privileged at the opportunity, like we were holding the golden tickets to Willy Wonka's Chocolate Factory.

After a problem with one of the vehicles caused a brief delay, we were finally underway at around 9:30.

Driving is a bit chaotic in Islamabad, but the closer we got to Rawalpindi, traffic became increasingly more haphazard.  Our Pakistani drivers didn't bat an eye, though, and we ducked and weaved our way through town like everyone else.

When we pulled into the brewery, it was a quarter after 10.  While this wasn't exactly the crack of dawn, it was still quite early considering what was in store for us.

Unlike every other brewery tour on which I have ever been, this one started in the tasting room, instead of finishing there.

Upon our arrival the manager welcomed us and immediately ushered us into a dining room.  There, a massive green table awaited us.  It was brimming with trays of savory pastries, bowls of chips and nuts, and beer, beer, beer.  It was only 10:30 in the morning, but we dutifully got the party started.

All three varieties of beer were available - Murree Original (4.5%), Murree Classic Lager (5.5%), and Murree Millennium (8%) - and there were flushed faces all around the table before long.  At 8%, Murree Millennium really packed a punch.  This "special occasion beer" also makes for a very cheap night out.  The going rate for a liter is about 50 cents.

Needless to say, this was quite a breakfast!

While we imbibed and ate meat pies, the manager gave us some background on the brewery.

The company began in 1860 with a brewery near the town of Murree, from which the brewery took its name.  It was built to cater to the thirsty British soldiers who were then controlling India.  At the time, Pakistan was still part of India.

In the 1880's two additional breweries were opened: one in Rawalpindi and one in Quetta.  The facility in Pindi also included a distillery.

The original brewery in Murree was one of the first modern breweries in Asia, but unfortunately, it did not survive.  Production mostly ended at that facility in the 1920's, and in 1947, when the British were painfully splitting Pakistan and India apart, the brewery at Murree was burned to the ground during a riot.  The facility in Quetta didn't fare much better.  It was leveled by an earthquake in 1935 and never rebuilt.

That left Murree Brewery in Rawalpindi as Pakistan's sole remaining brewery.  Before Partition, Murree Beer had been popular throughout the country, even with the locals.  After Partition, things changed.  As a conservative Muslim nation, Pakistan basically became a dry country.  The brewery was allowed to continue production, however, with sales limited to non-Muslims.  Today, it remains the oldest business concern in the country.

Anyway, after about forty-five minutes of beer and biscuits, we started the actual tour. 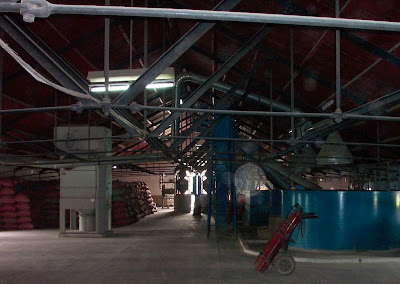 Much of the equipment in the brewery originated in Germany, and all of it looked very rustic.  Our guide led us through several rooms and explained the magical process by which water, yeast, hops, and barley are converted to beer.  There were tanks, valves, and pipes to negotiate, and in a few places the floor was uneven.  It was an accident waiting to happen, in other words, and I was the first klutz to showcase my graceful moves.  I walked around a tank and clocked myself on a metal beam.  The impact was pretty loud, so I didn't have much chance at playing it off.  I didn't feel too bad about it, though, because two other people would meet the same fate before the tour was over.  Maybe that's why most breweries do the sampling after the tour.  Ha ha. 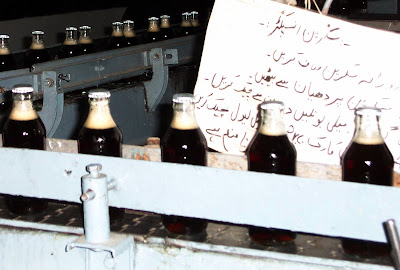 After the fermenting rooms, we came to the bottling room - my favorite part of any beverage tour besides the tasting.  On the morning we were there, they were bottling one of their non-alcoholic beers, Malt-79, and a handful of Pakistani quality control technicians were carefully watching the bottles run down the conveyor belts.  Seeing these technicians reminded me of a joke that I had often heard in expat circles.  For some people, the taste of Murree beer, especially Millennium, was a bit harsh.  The joke was that since it was brewed in a Muslim country, no one at the factory was allowed to taste the product and it went to market completely untested.

This wasn't true, of course, and the beer was routinely sampled by trained professionals.  Any harshness was therefore by design.

As I mentioned earlier, the brewery had an adjoining distillery.  We had not arranged to tour both, so our guide briefly explained their distillery operations and took us to see the whiskey aging in barrels in the cellars.  Besides beer, the Murree Brewery and Distillery also produced scotch, gin, vodka, rum, brandy, soft drinks, and fruit beers. 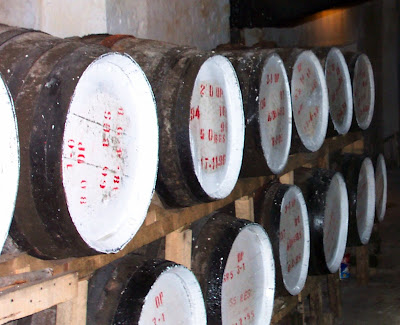 By 12:30, the tour was drawing to a close.  Our guide led us back to the dining room, and we enjoyed a few more brewskies.  While we were sitting there, the manager rejoined us, and this time he came bearing gifts: a Murree Brewery t-shirt for each of us.

The whole team at the brewery had been outstanding, but unfortunately, I had not come prepared with gifts for everyone.  I had brought along one t-shirt from the Embassy, so I presented it to the manager.  I wished I had brought a second one for our guide, though.

Once we were again well-hydrated, we loaded up in the cars and started back for Islamabad.

One of the security officers, Tony, was sitting in the front seat of my SUV, and as we drove through Pindi, he decided to throw us a bone.

"Does anyone want to stop at the markets while we're here?" he asked.

There is a time and place for everything, however, and as we looked out the windows at the masses of people sweating and haggling in the scorching midday sun, the answer was pretty clear.

"No, thanks!" was the unanimous response.

It wasn't every day that a chance to shop in Pindi came along, but sometimes enjoying a buzz in the comfort of an air-conditioned car on a hot summer day is reward enough.
Posted by Chris at 5:56 PM