On a fine Saturday morning, I went with some colleagues to the Khyber Pass.

Besides me, there were 6 other Americans and two of our local Embassy staff, split between 3 armored vehicles. As we were leaving Islamabad, everything was pretty normal – the road was nice, the driving erratic. Islamabad driving isn't real Pakistan driving, though, because animal carts, rickshaws, and the rest aren't allowed on the roads within city limits.

Twenty minutes out, we were off the motorway, and the animal carts were out in full force. Got a donkey, a horse, a goat? By all means, strap on a cart and merge on the highway in front of a packed bus going full speed.

When we left the motorway, we got on the Grand Trunk Road, which runs from Delhi to Turkmenistan, I think. The road got worse, and the driving followed suit. Chicken was the name of the game, and everyone was engaged in constant kamikaze passing. Where the roadbed didn't provide sufficient space, the action spilled onto the gravel shoulders. Unfortunately, there were also people riding bikes and herding animals in the shoulder.

Despite the less-than-ideal conditions, our caravan was moving along at a good clip. Our lead car was driven by one of the Pakistanis so the two follow cars were forced to match his driving style. The second car did well enough, but we kept losing our third.

The scenery along the way was great. There are all sorts of hills and mountains in Pakistan. Most of the ones on this trip were low on vegetation, similar to those in the American southwest.

Every half hour or so, the road led us through a town. The increased congestion of people and cars and animals would bring us to a stand-still more often than not.

About an hour and a half in, we came to Attock. At Attock, the Kabul River and the Indus River join. It’s cool because the Kabul is brown and silty, and the Indus is clear and blue. Where they come together, they flow like two separate rivers that just happen to be next to each other. Plus, there is a Mogul fort that overlooks the rivers. Attock is near the border for the Northwest Frontier Province (NWFP), which is a tribal province of Pakistan. The tribal provinces in Pakistan maintain considerable autonomy from the central government.

We passed the madrasas, the shanty towns, the refugee camps. The next big thing was Peshawar, which is the capital of NWFP. It’s a pretty big town, and we passed some familiar faces – Subway, KFC, and Pizza Hut.

We went to the U.S. Consulate and picked up some other people who would be joining us. Then we drove 2 more hours to the Pass. Foreigners aren't allowed in the Khyber District without special permission, but of course we had requested in advance.

When we arrived, our Frontier Corps escort was waiting. It consisted of 5 soldiers in the back of a pick-up. One was standing behind a gun mounted on the cab, and the others were seated with rifles. We had an hour and a half to go at this point, and those guards took off like a shot. We were going down to the border, and the road was gravel in parts and crudely paved in others. There were constant switch-backs, and plenty of traffic. There were buses crammed with people, oil tankers, cars, animals, pedestrians, and bicyclists, and motorists were still passing like they had death wishes.

The NWFP is somewhat famously lawless, and the closer we got to Afghanistan, the more evident this was. All of the men, and probably some of the women and children, were packing heat. There were plenty of little kids loitering around by the road, and they shot at us with their fingers as we drove by. There was one kid we saw carrying a rifle that was taller than he was.

There is a smuggler’s bizarre in Peshawar where it is said that anything can be purchased – even a fighter jet. Alas, we didn’t get to go. Another interesting thing about the region is that the closer to Afghanistan you get, the lighter the skin tones become. I was told by more than one of my Pakistani friends that if I ever wanted to pretend to be a native, I should grow a beard, wear a shalwar qameez, and let people assume that I was Pashtun (a western tribesman).

As on the GT Road, we passed through little towns on the way down to the Pass. As part of the security arrangements, though, the guards would stop all traffic when we approached so that we could sail straight through without stopping.

Since our cars were armored, they were much heavier than normal ones. Going up and down those pocked roads, our car was not having a good time. By the time we pulled up to the border, we had jack-hammered our suspension numerous times. The brakes were squeaking. Something kept thunking. Also, the air was so laden with dust that the A/C was filling the car with fine powder. We weren’t about to turn it off, though.

The Khyber Rifles is the group that guards the Pass on the Pakistani side, and a major gave us a lecture on its history, geography, and so forth. He had a cool model of the valley that he used during the speech.

After the presentation, we drove down to the gate at the border. Sometimes groups don’t get to go all the way to the border because of sniper activity, but this wasn't an issue on the day we visited.

The border gate was wide open, and all manner of people and vehicles were freely going through into either country. One of the people in our group commented on how loose the border security appeared to the major who was escorting us.

“Doh!” I thought to myself. I couldn't believe he was saying that to the guy whose job it was to monitor the border. Of course, the major assured us that all the people going through had proper documentation. I'm not sure my colleague was convinced. 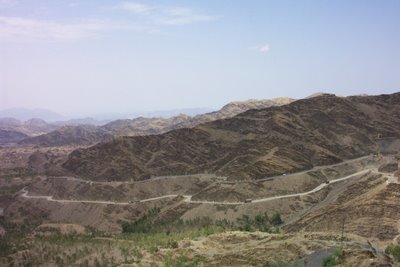 There were a lot of little beggars on the Afghan side, and they swarmed over to where we were and starting heckling us through the fence. Some other little kids were busy smuggling things over the border. These kids would run out behind moving trucks and tuck small bundles in with the other cargo. I have no idea what they were sending across the border. I didn't really see the point either, since it seemed like they could have just as easily walked 10 feet through the gate carrying whatever they wanted.

After a bit, we left the border and went to the Khyber Rifle Mess for lunch. The lunch wasn't ready straight away, however, so the major started giving us a tour. There were long walls filled with pictures and plaques that people had given the Rifles over the years. The major started going over the photos one by one. Looking down the wall at the dozens of photos we knew we would have to hear about, everyone felt a sense of dread.  (I was able to confirm this later.) There were some interesting photos of Khyber Pass visitors, though - Princess Di, Jackie Kennedy, Carter, Bush (the elder), Nixon, Reagan, General (then Captain) MacArthur, Al Pacino, and tons of dignitaries from other countries.

After forty-five minutes of looking at photographs, we were finished, and it was time to eat.

It was a traditional dinner, and waiters came around constantly during the meal with meats and rice and vegetables. The best strategy was to only take a little bit each time since the waiters returned again and again with the same dishes.

At first, there was some weak conversation. Then it was dead silent. It was a bit awkward, and I thought it was hilarious.

One young woman in our group, my good friend Heidi, was afraid of getting sick, so she took a small portion of everything and basically let it all sit on her plate. The major noticed, and he kept asking her why she wasn't eating. Instead of making a good excuse like she was sick or that it was too spicy, she just kept patting her stomach, saying how much she had eaten and how full she was. She wasn't fooling anyone.

Here’s the part I especially liked: Heidi was chugging the water like it was going out of style. It was not bottled water, and she was the one who was paranoid about getting sick. The rest of us stuck to the Pepsi. After the meal, I asked Heidi why she had engaged in such risky behavior if she didn't want to get sick. I know that she hadn't realized what she was doing at the time, but she just shrugged it off and said that she had been thirsty. Yet she had plenty of bottled water in her backpack. Hmm...

After lunch, we went outside to see the war dances. First, some guys came out and danced with rifles. Then some danced with ribbons. The last troupe danced with swords. We didn't know how to act, so we were all just sitting there a bit stiffly, sipping green tea. No one clapped along with the drums or anything.

As for the show, not to be culturally insensitive or anything, but the performances seemed a bit unmasculine. The sword dancers were wearing dresses, and all the dancers were generally a little too prancy, a little too smiley. In each troupe, there were 20 or 30 guys. The whole group would start the dance, and then small groups would break out. One small group performance, for example, was two guys that were facing off, in what was supposed to be a dominance dance. In reality, it looked more like they were courting each other.

After the dancing, our program was over. We thanked our hosts and then followed our lead-footed security escorts back to Peshawar. Then we dropped off our Consulate colleagues and hit the GT Road for Islamabad.

At one point, we got in one of the little traffic jams in one of the towns. As we were sitting there, a man without a shirt came walking up. The fact that he didn't have a shirt on was the first clue that something was up. No one ever goes without a shirt in Pakistan unless he is swimming. The second clue that this guy wasn't altogether there was his bugged-out eyes. Anyway, he came over to our car and started wailing on it with a stick. That alone wasn't such a big deal since the car was armored, but we drove up on the curb and got away. It doesn't take much to build a mob in Pakistan, and we didn't want to end up getting surrounded by 30 Pakistanis who had nothing better to do than try to roll a jeep over with some Americans in it.

We had gotten a late start in the morning, so the sun set while we were still on the road. Thanks to the black smoke pouring out of the trucks and all the dust in the air, visibility wasn't great. Driving was full steam ahead, though, and we all lived to tell the tale.

And did any of us get sick?  Possibly so, but there was denial all around.
Posted by Chris at 7:00 PM