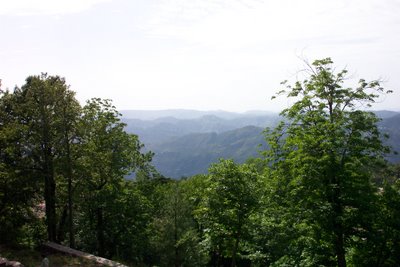 A month into my assignment in Pakistan, I finally went on an outing. The destination was Murree, which is about an hour from Islamabad. Murree is in the hills at about 6,000 feet, and it was once a British hill station. During colonization the British officers had summer homes in Murree to escape the heat of Islamabad. Actually, they were escaping the heat of Rawalpindi since Islamabad didn't exist at the time.

Anyway, I went with another American (my good friend Ross) and two Pakistanis. One of the Pakistanis was our local guard force commander, who was a retired captain in the Pakistan Army; the other was his friend, an army major. [Pakistan Army motto: We are the Punch!]

For the trip, we all crammed into the friend's tiny Honda.

Every ten or fifteen minutes, we passed a cluster of shops along the road. These shops were gritty, utilitarian stores selling food and tires and things. The farther we got from the city, the more animals there were roaming about. There were cows and water buffalos walking along the shoulders of the road. I was expecting to see a collision, preferably not with my vehicle, and the resulting hamburger explosion, but no dice.

As we got higher up, the air got cooler. Unfortunately, the higher we got up the mountain roads, the narrower the roads became and the easier it was for traffic to gridlock. In Pakistan, there are lumbering, colorful buses everywhere. They are often totally overloaded with passengers even filling the roof and hanging out of the doors. Well, there were a lot of these buses going into the mountains. They were slow; they were constantly blasting their loud musical horns; and they were spewing nasty exhaust. Since the A/C wasn't working in the Honda, black smoke poured in the windows as we chugged up the mountain at turtle speed. I was getting a headache.

Driving in Pakistan is very interactive, and people love to signal their fellow motorists to speed up or get out of the way. Every second, we were honking at someone or flashing the lights or something. Of course, the people in front frequently failed to respond, which naturally led to some hair-raising passes.

When we got to Murree, the traffic thinned out. The Captain had an adopted sister who was in a convent school there, so we signed her out and took her into town with us. She was in the fifth grade. Every time I would try my Urdu out on her, she would laugh at me. Everyone understood what I was saying to her, but I decided to stick with English since my Urdu was so hilarious.

When we got to the convent school - the Convent of Jesus and Mary - Ross wasn't feeling well and started vomiting in the bushes. It was real nice. He told us that he must have caught a cold, but on the ride up, he had told us about doing tequila shots the night before. My vote was that he was hung-over.

We went into town, and it was really touristy. There was an animal park, a chair lift, a dumpy looking carnival, horse rides, and so forth. There were a lot of Pakistani tourists there, and they were all toting their cameras.

Our first order of business in town was lunch, so our hosts asked Ross and me what type of food we wanted. My vote was the spicier, the better, and the sick guy concurred. Who was he trying to fool? We ended up going to a barbeque joint, and he didn't stand a chance.

We got a table, and when the waiter brought out the glasses and dishes, I couldn't help but notice that everything had food caked on it. Yum...

We ordered a nice spread of meats and curries and rice. Meanwhile, Ross started to feel nauseous again, so he went to the bathroom. This bathroom was one of those that is simply a room with a hole in the floor and a bucket of water next to it. Ross came back commenting on how he was still getting used to the bathrooms in Pakistan.

The food came after half an hour and we pigged out. It was pretty spicy. Still trying to put on a brave face, Ross loaded his plate with a mountain of food. He hardly ate anything.

We finished lunch and went to a handicraft store. Even with the tourist mark-up, everything was much cheaper than in Islamabad. We browsed around for a bit, and as soon as we left the shop, I noticed that Ross was running around with his cheeks puffed out. This was because his month was full of vomit again.

Ross ran into a hotel lobby to find a place to puke, but the doorman quickly assessed the situation and chased him back out into the street. There he hurled on the sidewalk and a bit into a flower pot.

On the Murree main drag, there were tons of little kids begging for money. Unlike in Islamabad, however, these kids weren't just beggars; they were little salespeople. They offered us shoe shines, chewing gum, balloons, bubbles, and cotton candy, and everything cost 5 rupees (about 12 cents). That was all good and well, so I was buying all of this junk from the tikes.

Of course, there came a point when I ran out of 5-rupee bills, and beggars don't make change. These kids kept hounding us, and they honed in on me in particular. I put on my sunglasses and didn't make eye contact, and they started going after Ross instead.

I didn't feel overly sorry for these kids because they were all wearing colorful velvet dresses and things, not the ragged clothing like the beggars in Islamabad wore. Plus, some of these kids that I had given money to not 5 minutes earlier were back hounding me. The only time they backed off a bit was during one of Ross's vomiting episodes. That was great to see.

Anyhow, once we finished browsing and had had enough pawing from the kids, we started heading for the car. As we got further on our way, the urchins started to disappear. Before long only one girl remained. She came up to my waist. Of course, she started up with her begging. "Saab, saab, only 5 rupees. Please." I told her no thanks and then a more forceful no in both Urdu and English, but she wouldn't relent. Then she started getting physical. She tried to reach into my pockets, and then she started pushing me. This was a bit awkward. What can you do to a little kid acting like this that doesn't involve manhandling her? Unable to come up with a better solution, I just kept walking. I walked a good hundred yards with this kid pushing me, and everyone was staring.

Finally, the Captain stepped in. He was a portly gentleman, and he took the girl's arm and told her the Urdu equivalent of "Beat it, kid!" The two of them had a short argument, and then the beggar girl left in a huff. Our hosts, who were cracking up, filled us in on what the girl had told the Captain. When he was shooing her away, she told him, "Stay out of this fat ass! If you had minded your own business, I would have had him." Little did she know that I wasn't about to give her anything. The whole pushing thing was a real turnoff.

We dropped the sister off at the convent school, of which there were at least three in Murree. Then after a few more vomit stops, and a failed try at stopping the sickness with some medicine from a local chemist (pharmacist), we came back down the mountain. The return trip was even slower and more polluted than the trip up had been. Plus, there were wrecked cars all along the way that had been collecting throughout the day. Apparently emergency services didn't believe in rushing things.
Posted by Chris at 11:10 PM

Hello my name is michelle murree, i am on here looking for as much info of my mothers home land, murree... i some day will go to this wounderfull place..
any one here have pictures or ant info they think i would love to read please feel free to send to my hotmail.. thank you very much,,
tyeasha26@hotmail.com
michelle murree..