RC Cola is a fixture in America, especially in the South, but it’s also making a name for itself in Uzbekistan.  I grew up with RC (yes, sometimes with peanuts, sometimes with MoonPies), so when the Embassy’s morale office organized a tour to the RC factory in Tashkent, it was a no-brainer.  I signed up Eitan and me.

The facility is on the edge of the city, and after a twenty-minute drive, we were ready to get started.

There were about twenty people total on the tour, our colleagues and their family members, and as we were ushered into the tasting room, it struck me that Eitan and I were the only adults there without accompanying children.  I didn’t feel out of place exactly, but I did wonder why none of our childless colleagues had attended.  I guess some view soda as a childhood treat. 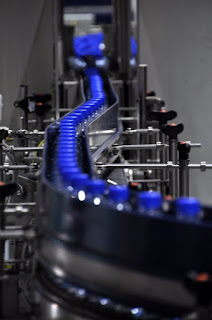 In the tasting room, we all took seats around little plastic tables.  Then the staff presented us with samples of RC as well as thick, plastic bottles that were about two inches long.  These little bottles, given to us as souvenirs, were the same type that would be expanded into half-liter bottles on the factory floor through the magic of heat, pressure, and mechanics.

The general manager welcomed us to the facility, and then with the help of his lab-coated quality control manager, he walked us through the tasting.

“First we must look at the product,” he told us.

“Hold it up to the light,” he instructed.  “The color should be dark.”

We dutifully held up our glasses for the visual inspection.  Check!

“Now swirl it gently,” he continued, “and put the glass to your nose.”

“Take in the aroma!” he exclaimed.

We dutifully swirled and sniffed, and at this point, I noticed some people rolling their eyes.

“Now take a small sip,” he told us, “and roll it around in your mouth.”

“Let it roll over your tongue!” he gushed.  “Feel the bubbles!”

The eye-rolling intensified.  Were we drinking wine or cola?

“Now,” the GM concluded, “if you like what you taste, you should drink freely.”

Whew!  What a relief!  We all drank freely.

Whether people genuinely liked it or they were just being polite, everyone had nice things to say about their RC experience.  The praise wasn’t quite universal, though.

“I don’t like it,” a young girl in the back of the room announced.

The GM laughed this off while the girl’s mortified parents reminded her that if she didn’t have something nice to say she shouldn’t say anything at all.

We resumed our soda sipping as our hosts told us a bit more about the operation.  In addition to RC, the factory also bottled water.  It was a family-owned venture, and they were happy to be the sole supplier of RC in Uzbekistan.

“Has anyone tasted RC before in America?” the GM asked.

I didn’t feel like raising my hand, but a few other people played along.

“And does it taste the same?” the GM continued.

“Yes,” one of my colleagues replied, “it’s pretty much the same.”

I knew this was the wrong answer, and the GM responded as I knew he would.

“Actually,” he said, “the formula we use here is a bit different than the one you are used to in America.”

Pretty much every soda manufacturer tweaks their formulas for overseas markets, usually adjusting the sweetness of the product, to suit local tastes.  However, the flavor profile is basically the same.  That’s what makes a Coke a Coke or in this case, what makes an RC an RC.

Next, the GM opened the floor to questions.

“Will you ever make RC clear?” a pony-tailed girl asked.

I think she was envisioning something akin to Crystal Pepsi, but the GM recoiled at the question.

“Cola must always be black!” he responded with a hint of indignation.

Since the topic of color was broached, however, he astutely took the opportunity to mention some future offerings from the factory.

“We’ll be launching a clear soft drink soon,” he told us, “like Sprite, but different.”

“After that we plan to introduce an orange soda,” he continued, “like Fanta, but different.”

I liked how he referenced these other beverages and then made sure to differentiate from them.

With the exciting news of RC Sprite and RC Fanta on the horizon, our session in the tasting room came to a close.

We headed to the factory floor and suited up in flimsy smocks.

Our guide on the factory floor gave us plenty of specs.  This process required this much water.  This machine produced this many gallons of soda per hour.  This extruder was heated to such and such a temperature and could form some impressive quantity of bottles per day.  It was all very informative, and it all went in one ear and out the other.

We were all too busy watching the specialized machines dancing their ballet under the watchful eyes of a team of guys who were trying their hardest not to acknowledge us.  I couldn’t blame them for their reaction, though.  I’d do the same thing if twenty people appeared in my office with a guide and lined up in front of my desk.


Both lines were running during our tour, so we got to watch bottles of both RC and water scooting around on conveyor belts.

Then after about 15 minutes, the show was over.  We de-smocked and emerged into the sunlight where a few RC employees presented us with t-shirts and free bottles of RC for the road.

It was a fine ending to the outing, like a refreshing belch after a frosty glass of RC.

Entertaining, as are all your stories. At some point, tell us about Uzbeck (sp??) food.
Love from Boston. Eleanor White

Thanks so much for sharing. Love reading the adventures of Chris and Eitan.