"Are you sure you don't want to sponsor anyone in particular?" the Marine at the table asked me.

Committed to building a memorial wall in the Marine House at the U.S. Embassy in Kabul, our Marine Security Guards were collecting donations from the community to honor the Marines who had died while serving in Afghanistan.  A donation purchased a name plate for the wall, and many of the people stepping up to the table had a personal tie to someone who had made the ultimate sacrifice.  Some people lined up to support a brother-in-arms they’d known on the battlefield.  Some were supporting a friend from back home.  I didn’t know anyone on the list, however, and I told the Marine as much.

I would be sponsoring Marine Lance Corporal Rick J. Centanni, and I felt compelled to learn a bit about his life.

Hailing from Yorba Linda, California, he played football at Esperanza High School in Anaheim – donning Aztec jersey #30.  He joined the Marine Corps after graduation and ultimately wanted to be a police officer like his father.  In late 2009, as part of Operation Enduring Freedom, he deployed to Afghanistan where his unit was tasked with disrupting the Taliban’s supply lines from Pakistan.   He died on March 24, 2010, when his vehicle struck a roadside bomb in Marjah, Helmand Province.  He was 19 years old.

A few months after the fundraising had begun at the Embassy, the Marines had secured enough money for the project, and the wall was constructed and installed.  On the day of the unveiling, the house was packed.  Coming late from the office, I stood with the overflow crowd which had spilled out the door.  I could hear the muted sounds of the speeches and the thunderous applause from the audience, but I was too far away to make out the words.  Then the wall was revealed. 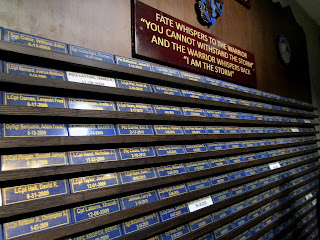 When the ceremony concluded, the Marines invited everyone to raise a glass to the fallen, and a happy hour started at the bar at the other end of the room.  There are many military memorials associated with bars, and the Marines were certain that this is just how the fallen would want it.

While the happy hour kicked off, donors were encouraged to find their Marine among the hundreds represented on the wall.  The name plates were arranged by death date, and I found Rick toward the center of the display, four rows from the bottom, along with his fellow Marine, Sergeant Major Robert J. Cottle, who died in the same incident. 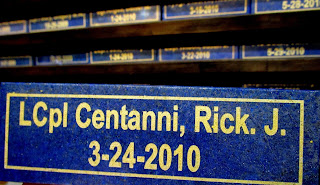 The name plates were made of lapis lazuli, Afghanistan’s prized blue semi-precious stone, and sized just smaller than a dollar bill, they had some heft to them.  I removed Rick’s plate from the wall, and as I turned it over in my hands, I couldn’t help but think:  This was his party, and like so many Marines around the world, he wasn’t even old enough to order a beer.

That was beautiful. Thank you for sponsoring a Marine and for sharing what you learned about his too short life. I imagine his family would be so happy to know that someone else is connected to that name on the wall. My dad was in the Marines and I've always admired them and feel so grateful when they get the honor they deserve - your post did just that for L Cpl Centanni.