Kabul: Hitting and Missing the Mark on 9/11

The relationship between September 11 and Afghanistan is complicated.  In the immediate aftermath of the attacks in 2001, most countries of the world issued statements supporting the U.S. and condemning the attacks.  Afghanistan was no exception, and the Taliban, who were in charge at the time, denounced the senseless killing of nearly 3,000 people.  At the same time, the Taliban were harboring Osama bin Laden and al-Qaeda within their borders, which put Afghanistan squarely in the cross-hairs of President Bush's War on Terror.  The September 11 attacks ushered in the U.S./UK War on Afghanistan, which was absorbed by NATO a few years later.

Fast forward a few more years, and I found myself in Kabul for the 14th anniversary of the attacks.  September 11, 2015, fell on a Friday - our one day off during the week - so I got to sleep later than normal.

At around 10 AM, Eitan and I went to brunch, and we were shocked when we entered the West Dining Facility (DFAC).  For some strange reason, the DFAC's decision-makers had decided to mark 9/11 with a cake.  The cake incorporated all the symbolism - the Twin Towers, the Pentagon, the date, and the flag - and across the middle, the word "remember" was written.  Meanwhile, on all the tables there were bottles of sparkling grape juice.  The DFAC is not allowed to serve alcohol, so on special occasions like New Year's Day (and apparently 9/11), they break out the non-alcoholic bubbly. 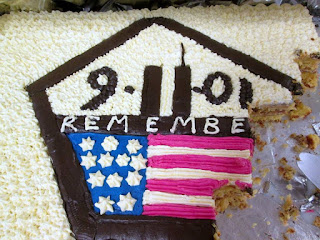 This was definitely in poor taste.  September 11 is not an occasion for cake and champagne - at least not for Americans - and everyone in my vicinity was grumbling at the display.

Skipping both the sparkling grape juice and the cake, Eitan and I had our lunch and set out for the official 9/11 commemoration at NATO base Resolute Support (RS).  In addition to many servicemen and -women representing the coalition partners, there were numerous civilians at the ceremony as well.  The program, which included a few speeches, a moment of silence, and a wreath laying, finished in under half an hour but still had the professionalism and decorum that military events so often do.  It was a nice contrast to the DFAC celebration.

After the ceremony, the crowd dispersed, and Eitan and I went to the bazaar.  It was pretty much business as usual as the vendors jockeyed for our attention, but something caught my eye at a carpet stall.  War rugs are popular here, with tanks, missiles, and jets appearing alongside more traditional motifs.  On this day, however, it was the first time I noticed the 9/11 carpets.  These carpets featured representations of the planes flying into the World Trade Center.  Carpets of this ilk had probably been hanging around the market for a while, but for some reason, I had finally noticed them.

The crude, pixelated images of planes and buildings reminded me of my time in Papua New Guinea.  In PNG, artists derive inspiration from current events in a very direct way.  Once I was in the market in Port Moresby a few days after some Australians had died in a helicopter crash, and there were numerous paintings interpreting the event.  It was the same story with wildfires, other vehicle crashes, and calamities in general.  Everything would show up on a canvas in a day or two.  Naturally, September 11 was also a major theme, and there were many paintings of this event, almost always done in the local style.

I viewed the 9/11 carpets with a certain amount of curiosity, but I felt no compulsion to buy one.

Eitan and I continued walking through the bazaar, and then Eitan noticed something altogether different.

I looked down, and I immediately got his point.

I had accidentally worn my sandals which was a violation of base policy.  There are a few dress-code rules for people entering RS from the Embassy side, and one of them is that open-toed shoes are prohibited.

As explained during my orientation, if an Embassy civilian gets caught on RS with a dress-code violation, he will be "arrested" by the military police and made to stay in the MP office until his supervisor comes to retrieve him.  Obviously the point of this is to shame people who don't comply, but I'm not even sure it really happens.  In any case, I didn't want to be the first in my circle to have the honor.

I had already been walking around RS for an hour at that point, and my feet had so far escaped notice.  I figured there wasn't any real reason to rush out, so we finished shopping and left about half an hour later.  I tried to play it cool as we walked ever closer to the Embassy gate, but part of me still thought I might get busted.

Back on safe ground, we continued our Friday.  We went to a cocktail party, did some chores, and watched some TV.  Then for dinner, we ventured to the East DFAC, and it was the same story as with brunch.  There was another cake stationed by the surf and turf, and sparkling grape juice graced every table.  All that was missing was a "Happy 9/11" banner.
Posted by Chris at 1:02 PM

As always, a good story well told. Just wondering though why open-toed shoes are a no-no.