When I checked my mail today, I received a curious package.

The package had been delivered to the U.S. Embassy in Papua New Guinea, and a former colleague of mine had forwarded it to me.

Inside the box was something bundled in bubble wrap and a note that read:

This message was a bit cryptic to say the least. I had hiked the Kokoda Track during my stay in Papua New Guinea, and my guide was named Max. I knew several other guides as well, some by name and others not, so I had no idea who had sent me this “cristal clay”.

Inside the bubble wrap was a piece of metal. The Kokoda Track was the site of intense fighting in World War II, primarily between the Australians and the Japanese, so my thoughts immediately veered in this direction. Was this a shell fragment? Was it part of a wrecked plane? Did it come off a jeep? 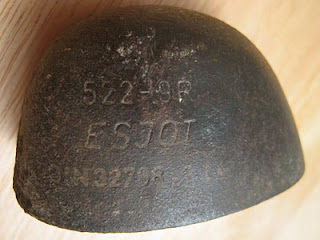 When I was working in Port Moresby, Papua New Guineans would regularly contact the Embassy to tell us about war relics they had uncovered. Sometimes they would also bring them to us or post them to us. These relics included everything from dog tags to shell fragments to helmets to human bones. We would send anything that might possibly be useful for identifying a missing U.S. service member to the U.S. Joint POW/MIA Accounting Command (JPAC) in Hawaii. JPAC's mission is to “achieve the fullest possible accounting of all Americans missing as a result of the nation's past conflicts”, and it has teams of experts constantly traveling the world excavating remains of American soldiers from foreign battlefields. JPAC gets a good share of leads for its recovery missions from tips submitted by local people.

As for the people contacting the Embassy about war relics, their motives were mixed. Some people genuinely wanted to help; some wanted attention; many wanted money; and some were a combination of the three. In addition to all the tips about war finds, we also received a fair amount of tips about Amelia Earhart and her plane. She was last seen in Lae, Papua New Guinea, before she disappeared, but most experts doubt she crashed in PNG.

Anyhow, on the rusted piece of metal I had received, there were some markings. It was stamped with the word ESJOT as well as two strings of numbers.

I googled Esjot, and it turned out to be a manufacturer of the steel protector pieces for steel-toed boots. Bingo! I was holding in my hand part of a boot. Soldiers wear boots, so the WWII angle was still alive.

Esjot is located in France, so I sent them an e-mail to see if they could shed some light on this steel plate based on the numbers stamped on it. In only a few hours, I had my answer: Esjot had manufactured this piece in November 1994!

So, some unnamed person for some unknown reason had shipped me a piece of junk halfway around the world!

I did get a few hours of fun from unraveling at least part of the mystery, though.
Posted by Chris at 12:01 AM

Hey Chris, good to read you again. I thought immediately of a steel cap from a boot when I saw the pic, but the term "Cristal Clay" where does that fit in???