Norway: The Cheapest Protein in Town

As a city on the water, I assumed that Oslo would have a proper fish market. From what I've seen so far, I assumed wrong. There are some grocery stores and specialty shops with respectable fish and seafood selections, but there is no specific market where fishermen can sell their catch.

While there is no fish market, however, the opportunity still exists to buy fish directly from fishermen. At the wharf in the well-to-do neighborhood of Aker Brygge, nestled among the pleasure boats, ferries, and tour boats, are two boats that sell fresh fish.

Aker Brygge is an expensive area of town, so when I first approached the fishing boats, I expected the prices to be sky high. Once again, I assumed wrong. Even in the Land of High Prices, there are still some deals to be found.

Of the two fishing boats that are normally at the wharf, one is manned by a man and one by a woman. The first day I went I talked to both fishmongers, and I decided to buy from the woman, who has now become my regular fish supplier. (A lady fishmonger is correctly called a fishwife, although I think fishmongress also has a nice ring to it.)

On that first day, the fishwife had four items for sale: haddock, bait fish (fingerlings), shrimp, and cod heads. I was immediately interested in the bait fish, but I chatted with the fishwife about the other products first. As I suspected, she was selling the cod heads for the cheeks or else to be used in soups.

When we got to the bait fish, I asked her how people were preparing them.

“You've got two choices,” she told me. “The Thai people grind them up in a food processor and make fish cakes, and the Moroccans fry them and eat them whole.”

I thought this was a strange answer. We were having our conversation on a Norwegian fishing boat, yet her answer did not mention any use for these fish in Norway. I wasn't sure if this was an oversight or if she in fact only sold these fish to the immigrant community.

It didn't really matter, though, because I already intended to fry mine. What the fishwife was dubbing the “Moroccan method” is common all over the Mediterranean, and I've had fingerlings (either grilled or fried) in Italy, Israel, and Greece, as well as Morocco.

The bait fish were selling for a very respectable 30 kroner per kilogram (about $2.45 per pound), so I got a kilo to try. The other items, while higher priced, were also reasonable. For example, whole haddock was selling for 40 kroner per kg ($3.25 per lb).

The fishing boats sell from 7:00 AM until around 3:00 PM, and when I was shopping it was close to 2:45. As I was leaving, the fishwife told me that I should come closer to the opening hour and I would be rewarded with a much bigger selection. While this sounded like a good idea, I have yet to get there very much before closing time. 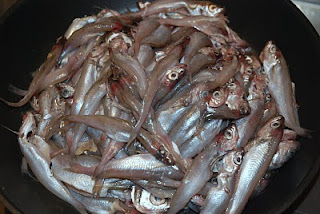 With my fish in hand, I headed home to prepare them. I was going to eat them whole as I mentioned, but I still had to clean them. I don't mind cleaning fish, and it's a good thing because cleaning my kilo was a bit of a time commitment. It took me an hour and 10 minutes to gut and gill the lot - 128 fish in total. There's an episode of the Simpsons where the family finds itself working in a fish processing plant in Japan. As Bart is gutting an endless stream of fish, he repeats to himself, “Knife goes in, guts come out.” I found myself saying the same thing. Luckily the radio provided a nice playlist for my gutapalooza.

Of course, once the tedious work was finished, the cooking and eating took no time at all. And there were plenty of fish left over for later.
Posted by Chris at 10:35 PM

Labels: every day experience, in the kitchen, Norway

But how did they taste Chris? Whitebait fritters are very popular along the West Coast of New Zealand...