One fine Islamabad Sunday afternoon, I decided to check out the Marghzar Zoo. Before I went, I mentioned it to one of my friends. She was sure the conditions for the animals would be horrible and refused to go.

In the end, I concluded that he was collecting money for his mosque. Or I think that was his story anyway.

I made a 50 rupee donation (84 cents) and walked up to the zoo entrance.

I was dressed like a local, and with my beard, I was blending in pretty good. I went to the ticket seller, and he charged me the locals’ ticket price of 5 rupees (8 cents). The foreigner ticket was twice as much, but 10 rupees is still pretty cheap.

I spoke to the guy, and of course when I did, he could tell I wasn’t a local.

He was about to ask for the 10 rupees when another employee who was hanging around the ticket booth spoke up. “Just let him pay 5 rupees. There is nothing to see here anyway.”

Then the man spoke to me directly. “Our lion is particularly bad," he told me. "Maybe he will even die today.”

At this point I was sold for sure.

The ticket seller agreed that the zoo had a few problems, and he waved me inside.

The zoo was pretty much like any other zoo I’ve ever been to, in that I have never seen any zoo where the animals looked particularly happy to be in captivity.

At this zoo, they had monkeys, jaguars, several types of deer and antelope, ostriches, jackals, foxes, birds, elephants, and the much-hyped lion.

Most of these animals looked pretty miserable, but like I said before, no more so than in most other animal parks. When I passed by, the lion was sacked out. Just taking a power nap, I’m sure. 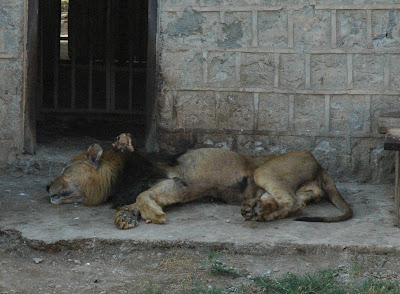 Toward the back of the grounds, there were children having pony rides. There was also a balloon guy.

There were a lot of families at the zoo, and many seemed to be just chilling out rather than looking at the animals.

At some of the exhibits, the animals were in cages with bars. Then there was a space and a little further out, there was a low fence to keep people out. Several times, Pakistanis would walk over the fence and go stand at the cage to pose for pictures. The guard would make a token attempt to keep them behind the fence, but not much of one. Most of the time, he didn’t even bother getting out of his seat.

Once I had looked at everything and was heading for the exit, the elephant guy called me over.

He brought an elephant over to the fence, and posed with it. He was speaking to me in Urdu, so I don’t know what he was saying. Maybe he was just taking pride in his work and telling me elephant facts. Probably more reasonably, he was either directly or indirectly asking me for a tip.

I told him I didn’t speak Urdu, snapped a picture, and moved on.

Before I left, I stopped at the snack bar and had an 8-rupee bottle of Pepsi.

Now one day, I’ll be able to bore young children with my stories of how in my youth, I could buy a ticket to the zoo and a coke and still have change left over from a quarter.

That alone made the trip a success – all the rest was gravy.
Posted by Chris at 12:51 PM